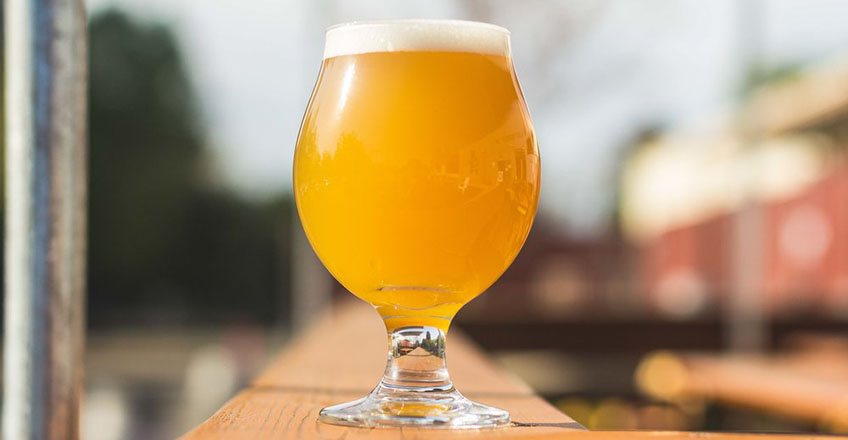 NEIPA, with a more moderate bitterness, more fruity and silky in the mouth than the classical IPAs, has emerged as one of summer’s most sought after craft beer styles.

But let's get to know more about NEIPA.

The IPA is a beer style that originated in XVII century England, when the British brewers sought conservation methods so that the drink did not lose its flavor and properties during long boat trips, where its main final destination were in the East Indies (giving name to of India Pale Ale).

Without the possibility of refrigeration or pasteurization, they came up with the solution of increasing the concentration of alcohol and hops, which had a high preservative effect, namely to prevent the emergence and propagation of contaminating bacteria that deteriorate the beer.

It was George Hodgson from the London Bow Brewery, who is credited with the idea that, based on a Pale Ale (high fermentation beer and lighter in color than the Brown Ale), which was customary to consume in pubs of the time, add higher amounts of hops and thus give rise to IPAs, which are more difficult to get spoiled in unfavorable environments.

This idea was a great success, being copied by other British brewers who decided to reproduce the style (something that later the North-Americans would also do), which made the drink popular in other corners of the world, namely on the Asian continent (since, finally, it would arrive in great consumption conditions).

With the arrival of refrigeration in the XX century, this type of elaboration has lost its raison d'être leading to the fact that the most popular classic beers have become exportable and dominant.

With the new millennium, a new way of understanding this ancestral drink has emerged, especially in the United States, where the craft beer culture has developed and spread in the search for some more intense flavors to challenge the standards of the oldest brands.

And it is on the West Coast that we will find the creative pole that will allow us to resurrect IPAs by adding an even greater concentration of hops than in the traditional English recipes, which allowed us to convey more complex flavors and a strong bitterness that makes these beers really addictive.

For this very reason, a very high percentage of the currently produced craft beers are IPAs, partly because of consumer’s preferences but also, it must be mentioned, because the use of a large amount of hops facilitates the production of an acceptable beer, since its intensity helps to "hide" possible flaws that are committed during elaboration or fermentation.

It is in the search for new nuances that, in the recent years, American East Coast brew masters have proposed to "tame" the IPA, in order to achieve some more balanced elaborations that seduce those who do not find great pleasure in its strong bitterness.

The result is the Vermont IPA or New England IPA (NEIPA), a beer style where the moderate bitterness paves the way to notes of citrus and tropical fruits. This is achieved through a process of fast but numerous phases of hops addition in the fermentation phase (dry hopping). Oats and wheat are added in the exact same way, the beer is not filtered, so the yeast remains in suspension, resulting in a beer that is more cloudy than usual, something that has become an intrinsic characteristic of the NEIPA. Its flavor continues with enormous character, although sweeter, more succulent, less alcoholic and a more silky texture, reason why they are also known as "Juicy IPA".

The success was immediate in the United States and, little by little, it would arrive in other countries, including Portugal, being especially appealing in the summer.