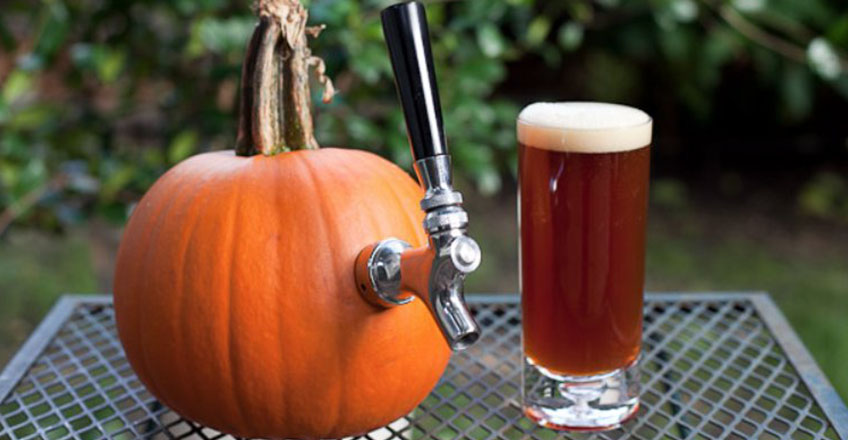 More than a decade ago, Mark Pasquinelli embarked on a mission to produce the perfect pumpkin beer. I'll share with you the techniques to prepare one of autumn’s favorite beer styles, with a rich pumpkin flavor and an assertive spice profile.

The Pumpkin beer precedes the foundation of the United States. Elaborated with an indigenous fruit unknown to most Europeans until the XVI century, it was America’s first truly national beer. In the early colonial days, it was humbly produced due to necessity, when malt was scarce and fermentable sugars had to be found from other sources. Beer became popular among settlers, either directly or mixed in a cocktail known as a "flip." But nothing lasts forever, and in the nineteenth century the use of this ingredient fell into disuse when one began to consider it to be something too rustic and picturesque.

The style was resurrected more than a century later - in 1985, during the early times of the craft revolution - by Bill Owens of the Buffalo Bill's Brewery in Hayward, California. Owens, inspired by one of George Washington's recipes, developed a pumpkin beer and added a special factor: spices (not featured in the colonial versions). A star was born this way.

Today, it seems like all brewers and brewpubs make a pumpkin beer, converting it into one of the favorite seasonal styles in the US.

It was in the search of a perfect pumpkin beer that Mark embarked on a mission of more than ten years. The version presented here is robust, clean and with solid grain malt, which packs tons of pumpkin flavors and displays an assertive spice profile. It will be like savoring a pumpkin pie from a cup. The foremost special ingredient is a small time investment.

Many beer styles can serve as the basis for the production of a pumpkin beer. For instance, a Porter or a Stout can make an excellent complement to the spicy notes. Mark's recipe is based on an Amber Ale, which has a solid malt spine to support the pumpkin and spices and leaves a beautiful orange color to shine.

The grain note is simple: Pale Ale and Munich are the base malts, selected for their "bready and toasty" characteristics; the recipe is enhanced with Belgian specialty malts, such as the Dingemans Aromatic, and Caramunich for its aroma, an indication of sweetness and orange-brown pumpkin color.

A dose of brown sugar completes the recipe and adds a touch of colonial authenticity. It is a common ingredient and it provides additional fermentable elements to increase the percentage of alcohol without cloying the beer. A specific gravity of about 1.065 appears to be perfect - providing the best balance between the percentage of alcohol and the drinking capacity. The mash should be in a single step, 68ºC for 60 minutes, to ensure a rich and full-bodied beer.

A pumpkin beer needs ... pumpkin! This revelation is lost when some microbreweries use canned pumpkin instead of a fresh one. All of that done in order to be the first to reach the stores. Of course this is a violation of all that is sacred in the culture of brewing.

But it's of no good to use any pumpkin. Traditional pumpkins, used on Halloween as lanterns, are not the best choice as they provide little flavor and fermentability. Crookneck (or butternut) pumpkins, also known as "neck pumpkins", which are tanned in color and similar to a cashew on steroids, are the most indicated. The recipe requires about 500g for every 4 liters.

The pumpkin has to be ready a few days before brewing the beer. It should be cut into several pieces (about 15cm long), put into an aluminum foil and easily sprinkled with brown sugar. Then, it is to be baked in an oven at 190 °C until it softens. This takes approximately two to three hours. During roasting, the brown sugar will melt and caramelize on the pumpkin, providing extra flavor. It is then removed from the oven and left to cool. Finally, the pumpkin skin is removed and cut into large cubes (preserve the juice to give it later color and flavor) and stored in a covered bowl then kept cold. On the day of preparation, let it come to the ambient temperature before adding to the mash. For those who make large quantities, in order to avoid clogged valves or siphons, the pumpkin should be placed in a large fine mesh bag for fruit.

In a pumpkin beer, the hops must be very discreet. It is preferable to use those varieties which contain high alpha-acids content - such as Northern Brewer, Galena or Magnum. One dose is enough for a bitterness of 20 IBUs, which keeps the sweetness of the malt under control.

Spices bring the pumpkin beer to life. It is precisely them that occupy the traditional place of aromas and flavors of the aromatic hops. And this is where we must get creative and let the imagination work. We can be ambitious in using cinnamon, nutmeg and ginger, giving even a touch of vanilla. Saigon cinnamon (Vietnamese cinnamon), for its strong, rich and sweet taste is mostly preferred, with allspice being a good choice.

The vanilla is the main final additive, and should be added in secondarily to give a mild aroma and flavor and fit the profile of spices. Over time the vanilla will stand out.

The amount of spice used can seem daunting. However, most pumpkin beer recipes require only one or two teaspoons. Do not be afraid. The worst that can happen is getting an unbalanced beer! When in doubt about the quantities, we shall add the spices gradually according to your own taste, until reaching the desired flavor. It is always possible to add more, but be aware that once added it cannot be subtracted!

The choice of the yeast strain is quite important, WLP002 English Ale is advised. This yeast begins very well and flocculates beautifully a few days later, leaving a wonderful pumpkin color and the desired sweetness. The fermentation should be between 18º-20º, but at 22º-23º it seems to give a better flavor profile (perhaps due to the increase in esters production). Alternatively, you can opt for the White Labs WLP565 or Wyeast 3724 Belgian Saison, which also promote the production of some wonderful pumpkin beers.

Even if the primary fermentation is complete in a few days, wait for at least a week before passing it for the second fermentation. The secondary phase lasts another week or two. At this stage, explore its nature and add more spices as needed. The spice profile may seem a bit rough at this point, but do not panic. All the flavors will magically unite. Add vanilla a few days before bottling.

Sometimes waiting is the hardest part, but your patience will be rewarded. The "Perfect Pumpkin Ale" recipe takes about a month of conditioning treatment to peak, which will hold throughout the winter and into the spring (though we believe that your first perfect pumpkin beer will probably not last as long!).

We should not be content with anything less than the best from our malts and hops. The good things - gourmet cinnamon, ground nutmeg and ginger - cost a little more, but the flavor makes up for that effort. Vanilla does it as well. The imitation vanilla is vile and can not be compared to the pure vanilla extract!